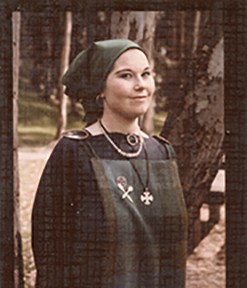 Her career with DunDraCon started the year after I attended without her. She declared that she would NOT be left home alone with two small children again and if I were going to go again, we all were. So the next year, we all went.

She discovered that the volunteers from Visitors & Conventions Bureau that were typing membership badges (this being before it all went on computers), were slow and didn't really understand the sort of badges SF cons (and, by derivation, DunDraCon) were used to. So she displaced one of the volunteers and started hammering out badges about 5 times faster than anyone else.

Once I had observed that the whole process would work better on a computer and wrote programs to do it, she became the mainstay of Pre-Reg (at our home) and high speed entry at the con when we had reg lines of any length.

One memorable year, we had a computer failure. Dorothy spent the con typing badges using a terminal slaved to a serial printer, doing the badges complete with font style changes on the fly.

She also decided when badge names were inappropriate to use. The basic criteron being...would it upset your grandmother? Didn't have to do so very often. (And don't push it now. Not all of the rejected ones even got to her.)

When main Reg and Pre-Reg desks were separated for the first part of the con, she took charge of Pre-Reg.

At her last DunDraCon (2022), with her health failing, she swapped jobs with Meg Creelman, taking over the Demo room while Meg covered the Pre-Reg table.

She resigned from DunDraCon corporate membership at the end of con meeting at DDC 45, due a combination of Chronic Fatigue Syndrome (which she'd had for about 40 years) and ALS.

She was also my beloved wife for 51 years. 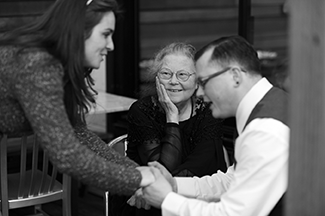